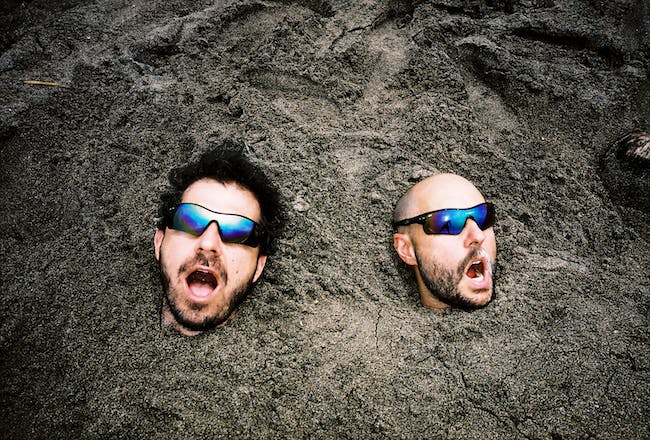 The story of Bag Raiders is already the stuff of legend but in 2019, the Sydney duo will prove that their best has only just begun. After years at work on their most exciting music yet, production dream team Jack Glass and Chris Stracey are now ready to share their highly-anticipated second album Horizons, arriving this year on Universal Music Australia.

Horizons documents the journey Bag Raiders have been on since the release of their hugely popular debut in 2010, from club superstardom to world tours and one runaway viral meme. Conceived, written and recorded all over the globe, it serves as a digital collage of more than five years of life, inspiration and experience.

It’s been a nonstop run for Bag Raiders since the release of their self-titled debut. In the past few years the pair have turned out a set of EPs that have pushed their sound into new territory, from the tropical sonics of ‘Nairobi’ through to the silky vocals of ‘Beat Me To The Punch’, ‘Checkmate’ and the vibrancy of ‘Friend Inside’ and ‘Waterfalls’. A busy tour schedule has taken them around the world, seeing Glass and Stracey play a 30-date string of shows across North America, support icons Duran Duran and Chic, and take the stage at festivals like Splendour in the Grass and Bestival Bali. They’ve kept one foot in the club with regular DJ shows around Australia and remixes for the likes of Riton, Totally Enormous Extinct Dinosaurs, Crooked Colours and Banks.

So Horizons became the perfect title for an album with a lot of history but, most importantly, an eye to the future. “Making this album has been a journey for us, a long one,” Chris says. “Horizons made sense because the closer you get to it, the further away it gets from you. We’re always moving toward something and we try to express that through the music.”

The new album is a maturation from a duo who are, by their own admission, “a little older and wiser now”. While the club banger sound Bag Raiders built their name on isn’t completely gone, it’s tempered by slower, breezier and more introspective tracks. The intention was to steer clear of flavour-of-the-month sounds in favour of something with staying power and substance. The pair also wanted to make an album to suit a range of moods, from new affections (‘Lightning’) and lovesick introspection (‘How Long’, ‘I Need You’) to cinematic bravado (‘Wild at Heart’) and propulsive late night healing (‘Medicine’).

To help them bring the songs to life, Bag Raiders tapped a cast of Australian collaborators. Homegrown heroes The Kite String Tangle, Panama, Mickey Kojak and Tora all feature on Horizons, a new approach for a pair of producers who are used to handling everything from the beat to the vocals themselves. “It feels cool that we’re representing all this great Australian music,” Jack says. “They add a whole other dimension to these tracks and to hear them brought to life with these different characters and voices is really exciting for us.”

Every artist Bag Raiders approached for the album was someone they admired, but the process varied with each collaborator – some songs were recorded at home in Sydney, others came together over the internet and evolved over time. “Each song is a different story,” Bag Raiders say. “That’s one of the best things about it. Some songs we’d already had written and it was just a tweak here or there from the vocalist to suit their style more, other songs came more from the vocalists, and we did a couple of tweaks together here and there to make it all work with the production.”

The album’s first unshakable collaboration comes from The Kite String Tangle, who soars on the lead single ‘Lightning’. Full of the euphoric, dancefloor-ready production they built their name on – but with more maturity and more emotion than ever before – ‘Lightning’ is the bridge between the sound of Bag Raiders old and new. It’s about the bolt of new affections and “undeniable pull” that comes after meeting someone new and was first conceived, fittingly, during an electrical storm. “It’s a reflection on thinking you don’t need anyone but then meeting someone who has such an undeniable pull that you couldn’t keep yourself away even if you tried,” Bag Raiders explain. “Love isn’t always smooth sailing, sometimes it’s sunshine and rainbows, sometimes it’s rain and thunder.”

Another album standout is ‘How Long’, their collaboration with Sydney talent Panama. What started out as nerdy modular studio experiments eventually became a song about “waiting for love to come back around” with heartfelt songwriting from Panama’s Jarrah McCleary. “How long will your love take/ Can’t you see I’m ready for this to be?” he begs, a sense of longing accentuated by Bag Raiders’ wailing synths and icy production. A result of their personal connection with McCleary, ‘How Long’ feels like a testament to the power of collaboration.

The birth of Bag Raiders dates back to the clubs of Sydney’s mid-aughts, when the duo were part of the wave of now-iconic producers and DJs who put Australian dance music on the world stage. They cut their teeth spinning at the city’s legendary Bang Gang DJs parties and began turning out electro edits and remixes of their own, studio experiments that culminated in the release of their Turbo Love EP in 2008.

The B-side to that EP was a little track called ‘Shooting Stars’, which Modular Records quickly picked up and gave a single release the following year. The rest is history – ‘Shooting Stars’ was an instant smash, going Triple Platinum, snagging a top 20 spot in that year’s triple j Hottest 100 and leaving a legacy as one of Australian dance music’s finest moments. It even made an unexpected comeback last year as the soundtrack to a viral meme, gaining so much traction it featured in a spot on Jimmy Kimmel, Katy Perry’s ‘Swish Swish’ video and shot the track back up the dance/electronic charts in the US.

In 2010 the boys shared their beloved self-titled debut album, scoring an ARIA Award nomination and spawning the singles ‘Sunlight’ (which achieved Gold certification) and ‘Way Back Home’ (Gold certified in Germany) as well as the massive success of ‘Shooting Stars’.

Now with Horizons, a legendary pair of artists are stepping into a new era.

Argonaut & Wasp are a Electro/Funk/Rock band out of Burlington, VT. They blend an innovative and ear pleasing mix of house, EDM, funk, and rock to create the distinct sound that is A&W.

Nick O’Neill, better known as Módl, is set to make a big comeback in 2019. The 22-year old producer decided to transition away from his coveted future bass style into easy listening melodic pop via Módl 2.0.

The Virginia-based producer leverages new influences from artists such as filous, Shallou, and Instupendo to create captivating atmospheres highlighted by smooth guitar-riffs and soothing vocals. With this new style, Módl has been invited to play a number of shows and festivals including a live set supporting Golden Vessel in July.

Módl previously saw success in 2018 with his original track "Years From Now" being picked up by Express Clothing’s International commercial marketing campaign. His music has gained support from channels including but not limited to Mr. Suicide Sheep, EDM.com, Hegemon, Wonderlust, and ThisSongisSick.com.