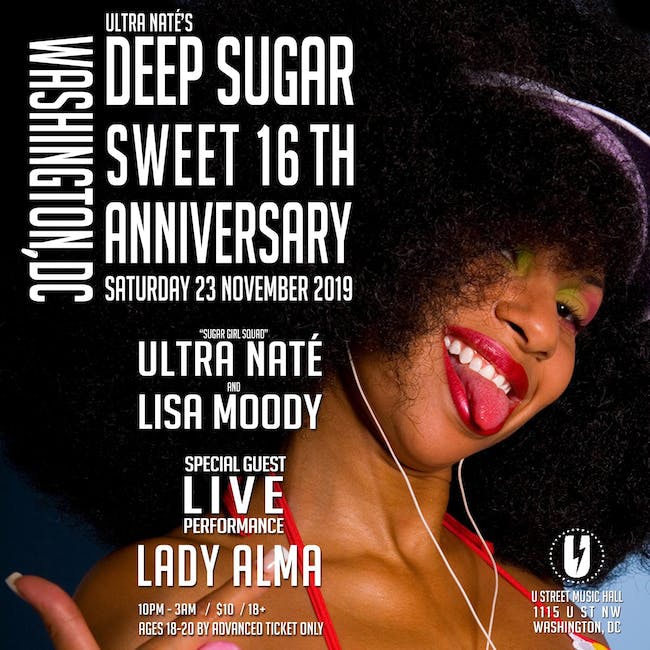 Deep Sugar is a Baltimore based event formerly at the seminal Paradox venue (10 years). DS as it is lovingly called also holds residency in the District (Washington, DC) at U Street Music Hall periodically throughout the year. A Deep Sugar party is a multicultural and extremely diverse coming together of like minded people! They come to dance and celebrate the music in a pure underground experience that takes you back to the fundamentals of clubbing. For Deep Sugar heads - this is not just a lifestyle..it's church.

The story began in 2013 when international dance music recording artist Ultra Naté along with DJ Lisa Moody and key friends, artists & DJs from Baltimore made a commitment to give something back to the scene and keep it thriving. Their goal was to create a world-renowned, marquis dance party that follows in the footsteps of Paradise Garage, Zanzibar, Odell's, The Warehouse, Shelter, Club Fantasy and Body & Soul. Meaning it goes beyond being just another party but more of a cultural and spiritual experience. A safe space to tune the stress and cares of the world out and let your soul soar!

The Deep Sugar sound is characterized by a blend of soulful house with dance and disco classics thrown in, while giving a nod to some of the harder soulful tech sounds - a formula that has kept Sugar party goers' feet rooted to the dance floor remembering the past and looking towards the future.

Deep Sugar moves forward into the new world of music with a vision, a dream, plenty of heart, soul and two kick ass chicks!

I am Ultra Naté and am based in Baltimore, Maryland as a singer, songwriter, DJ, producer and promoter. I have released eight studio LPs [1990-2013] and travel around the globe performing and spinning live for a variety of audiences.

I've been writing my own songs since the beginning of my career. This was pivotal in establishing me as an artist with a distinct style all my own. I was one of the first artists in house/dance music signed to a major record deal with Warner Brothers in the UK in 1989 and I have more than 25 years of experience making groundbreaking music having collaborated with a wide array of artists such as: The Basement Boys, Nellee Hooper, D-Inflience, Mood II Swing, Nona Hendryx, Lenny Kravitz, N'Dea Davenport, DJ Class, NERVO, Tony Moran, StoneBridge, Todd Terry, David Morales, Michele Williams (of Destiny's Child), Boy George, Morgan Page, Quentin Harris and others!

My sound embraces a variety of genres including house, soul, disco, electro pop, R&B/hiphop and rock and I am honored to be considered an icon of the Dance and LGBT communities worldwide.