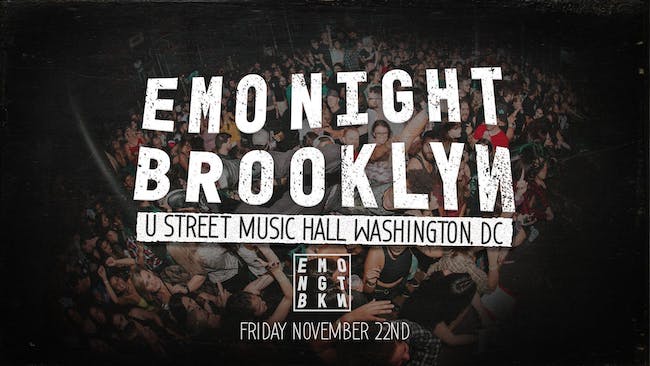 If this is your first ENB, be prepared. Walk through those doors and travel back in time… To when jeans were tight and bangs were long (and straight). To when Taking Back Sunday & The Used ruled the airwaves and Fuse played all the hits. To when My Chemical Romance were still a band! Hit the bar, take a shot of Jack Daniels and find that special someone so you can Dance Dance the night away then Slowdance On The Inside.

If you like Taking Back Sunday, My Chemical Romance, The Used, Fall Out Boy, A Day To Remember, Yellowcard, Paramore, The Wonder Years, Underoath, (the list goes on) - welcome home. We will be spinning all the Emo & Pop-Punk essentials till they kick us out.

Emo Night Brooklyn was founded by two best friends, Ethan and Alex, who grew up listening to music, going to shows, and having some epic parties together. The first ENB was in a packed basement in local Williamsburg bar Cameo. The party proved to be one of the best nights of their lives, and it instantly grew to a New York monthly staple, moving the party to larger venues such as Brooklyn Bowl and Irving Plaza.

Since then, many icons of the emo/punk-rock scene have joined the party to guest DJ, including Ryan Key of Yellowcard, William Beckett of The Academy Is, Jordan Pundik of New Found Glory, and many more.

Ethan and Alex have now expanded the party to not just other areas of the country, but to other parts of the world. The two regularly bring ENB to over 40 cities in US, plus internationally in London and Berlin.