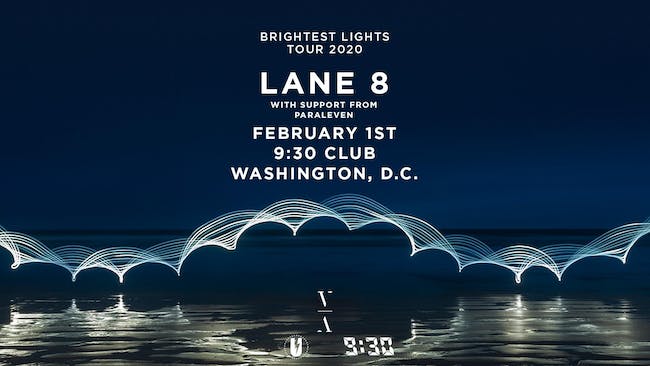 iCal
Google
Leave your phone. Experience the moment. This Never Happened. // $1 from each ticket will go to PLUS1.

Lane 8 has partnered with PLUS1 so that $1 from each ticket will go to saving lives, revitalizing communities, and transforming global health through Partners In Health.

“We are so bombarded with negative energy at the moment, especially on the internet, and in my opinion you have to literally and consciously remove yourself from the loop at times to remember all the positive and amazing things happening every day. ‘Brightest Lights’ is about focusing on that positivity in the world.”

Released in January 2020, Lane 8's third album ‘Brightest Lights’ captures the positivity and emotion of the Lane 8 DJ experience, as well as offering more of the reflective and emotional songwriting featured on his last LP.

Join him as he brings the album tour to Washington, D.C. at 9:30 Club this February.

The album tour will once again promote his This Never Happened concept, with the dance floor becoming a phone and photo-free space.

Leave your phone. Experience the moment. This Never Happened.

Rather than pander to the purists or create music for DJs alone, Daniel Goldstein aka Lane 8 has always tread his own, distinctive path - perhaps best summed up by his phones-free event and label concept This Never Happened.

The concept is a simple one: remove all phones and cameras from the event, get back to connecting with the music and the people around you. And it is one that has been embraced with passion by Lane 8’s dedicated fanbase and the dance community at large with over. Since debuting the concept with a sold out show at San Francisco’s Mezzanine in 2016, Lane 8 has taken the concept to over 60 shows in four different continues - playing to over 50,000 completely connected fans in the process.

In tandem with the events, Daniel’s output on the TNH label has stood out for its integrity and artistry whether on emotional epics like ‘Little Voices’ or upbeat groovers such as ‘With Me’. Always defined by a melodic touch, TNH is the culmination of a steady, assured rise over recent years.

This musical progression continued this year when Lane 8 released his sophomore album ‘Little By Little’ on the TNH imprint. With it he delivered a record that distilled his unique flair for melodic, heart-warming electronics that are both classy and quirky, traversing reflective electronica, instrumental club epics and leftfield pop moments alike.

Following its release, Lane 8 embarked on a 37 date global tour which included sell out shows at Brooklyn Steel in New York, The Warfield Theatre in San Francisco, The Novo in LA, Melkweg in Amsterdam and Phonox in London.