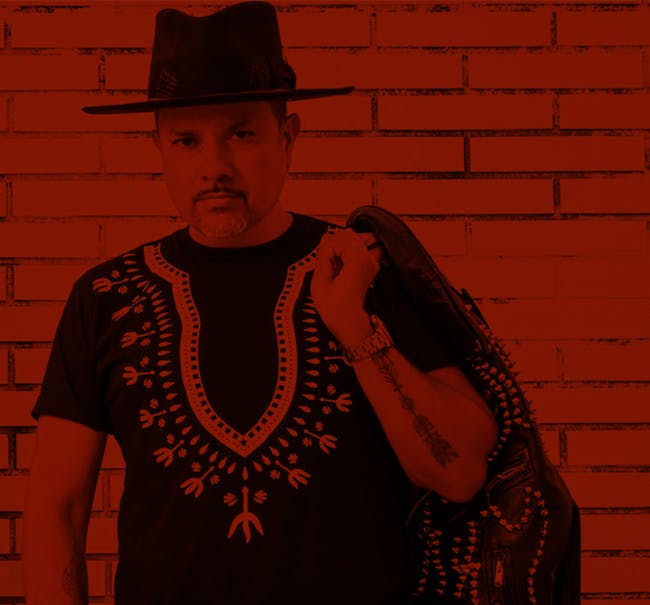 A leader in global dance music, Louie Vega has painted an award-winning career from a palette mixed with everything from house, salsa and afro-beat, to jazz, hip hop, gospel and soul.

What distinguishes the Grammy winner and 7-time nominee as one of the best living house music deejays is his ability to evolve alongside the times, distill the current musical landscape through his unique taste and put his own timeless spin on all the music he creates.

“Little” Louie Vega, as he is sometimes affectionately known, was born in the Bronx into a musically gifted family (his father is a jazz saxophonist and his uncle, Salsa King Héctor Lavoe). The “Little” moniker is ironic, given the fact that by the 80s he was deejaying at clubs he wasn’t even old enough to attend, holding residencies at Studio 54, Devil’s Nest, Heartthrob, Roseland and playing at the Palladium, Area,1018 and other seminal New York City Clubs. Soon Vega was producing his own remixes, which included Information Society’s “Running”, “What’s On Your Mind”, Noel’s “Silent Morning”, Cover Girl’s “Because Of You”, and Debbie Gibson’s “Only in my Dreams.”

Then in 1991 he joined Atlantic Records and recorded an album — hitting the mainstream. Teaming up with an up-and-coming Marc Anthony, he produced “Ride on the Rhythm” co-written with India & Derek Whitaker. An immediate club hit, the single put Vega and Anthony on the map. The duo would rock the club circuit with their success culminating when they opened for Tito Puente at his 100th Album concert at Madison Square Garden.

One of the keys to Vega’s success is his refusal to be boxed into any one category, marked by the various styles his songs play with and by his fruitful collaboration with other artists.

Like his businesses, Vega’s music also flourished. In 2006, he received a Grammy Award for his remix of Curtis Mayfield’s “Superfly” on Rhino Records. Then, not more than a year later, Cirque Du Soleil approached him and the house-music group Blaze to compose and produce a song for a once in a lifetime event. Anané Vega sang the lead and the Elements Of life band performed the song “One Dream” to the acrobatics and art of Cirque Du Soleil during the 2007 Super Bowl Pre-Game Show to over 70,000 people at Miami’s Dolphin Stadium. The performance was viewed by 145 million television viewers.…Yet as we move through the twenty-tens, Louie shows no signs of slowing down…

Vega’s global fandom requires the famed producer extraordinaire to be in many places at once. Radio was a natural extension to his dj performances. In 2010, Vega and Kevin Hedge started a show, Roots NYC Live Radio Show on WBLS 107.5 (New York’s longest running and biggest R&B and soul radio station). Rated the #3 radio show in New York on Friday night, they air every Friday from 10PM –Midnight (stream live www.wbls.com). To keep the music flowing on all continents, Vega can also be heard every Friday from 8pm – 10pm at House Fm on the Dance Ritual Radio show with (www.housefm.net) in London, and every Saturday since 2010 at 10pm via KAYA FM’s Dance Ritual with Louie Vega (www.kayafm.co.za) in Johannesburg, South Africa.

The album’s occasion was momentous because it was the first ‘new artist’ album Fania released in years. In Vega’s words, “…It really comes full circle now, being able to be on the label my uncle Héctor Lavoe was on and the Fania All Stars who are all great inspirations for me. Fania Records is to Latin music what Motown is to R&B and Soul, so to even be a small page in this encyclopedia of music is a dream come true.”

2016 was a monumental year for Vega. His emblematic 2016 album Louie Vega Starring… XXVIII was nominated for a Grammy award for Best Dance / Electronic Album. After 30 years in music, Vega has reached a distinct and unmatched level in his career. He knows where global sounds live and hide. And he skillfully capitalized on relationships with the leaders of those sounds by understanding what they represent and how they can be infused. There are few times in an artist’s career where their sonic pallet and connections with other artists reach a level of pure magic. This album is the latest testament to Louie’s growing legacy as a master bricoleur. Starring...XXVIII is a dual disc conceptual record featuring over twenty-five artists on twenty-eight different songs. Collaborators on the album are George Clinton & Funkadelic, 3 Winans Brothers & the Clark Sisters, Josh Milan, Ananè Vega, Lisa Fischer, N’Dea Davenport, Caron Wheeler, Monique Bingham and more. The record is Louie Vega’s first solo album and a contender for his magnum opus.

And music critics aren’t the only ones celebrating Vega’s influence and impact. Kanye West released his seventh studio album, “The Life of Pablo” to ravishing fanfare and spectacle. One of the album’s stand out tracks and fan favorite was “Fade,” which finds West diggin’ in the crates to sample two Vega and Barbara Tucker classics - “Deep Inside” by Hardrive featuring Barbara Tucker and “I Get Lifted” by Barbara Tucker. Vega and West fans alike will rejoice thinking of the amazing studio sessions involved in creating the original and the contemporary remix of the classic. Once again, Vega constructing bridges that traverse boundaries and bring people together through music.

It’s worth mentioning that Kanye wasn’t the only hip hop superstar lending his raps to Vega’s sound. Compton- MC Kendrick Lamar jumped on the remix of “Ain’t That Funkin’ Kinda Hard On You”, the standout track from Vega’s 28 album featuring the pioneering funk legends, Funkadelic and their leader, George Clinton. The power of Vega’s ability to serve as a sonic liaison on full display.

2018 was another MONSTER year for Vega. He’s been in the the studio with fellow jet setters and dj duo The Martinez Brothers working on a new album project. Their first release “Shut The Door” featured the vocals of Hector Lavoe on an energetic techno track hit dance floors worldwide, truly bringing together 3 generations. Vega and Kenny “Dope” Gonzalez (Masters at Work) are also gearing up for new releaseswith Kenlou & Masters At Work. Vega also released in June 2018 his new album “Nyc Disco” on Nervous Records paying homage to the sounds of disco and the infamous Sam Records Catalog. The creative collective Elements Of Life are hitting the road live soon, they just played to a sold out audience at Royal Festival Hall / Southbank Centre London. Vega provided a sneak peak of the tour’s energy in October 2016 when he played to a crowd of 22,000 people over the course of two days at South Africa’s Delicious Food and Music Festival. Vega brought along featured artists such as Lisa Fischer, Josh Milan, Anané Vega, Monique Bingham, Bucie and Adeva. Other Vega projects include album and or single collaborations with The Martinez Brothers, Joe Claussell, Joseph Capriati and a future Elements Of Life jazz project with some surprise artists and producers. On the solo production side, Vega is producing new releases for Luther Vandross, Kings Of House NYC Featuring Julie McKnight, & a new production with Joseph Capriati.

Anané and Louie Vega will carry on tradition with “The Ritual”, an outdoor party held at prestigious indoorvenues and beach clubs around the world and drenched in the sounds of House, Global Disco, Afro tech and Old School. The Ritual has toured the Mediterranean every summer since 2010, including a two-year residency at the Blue Marlin Beach Club in Ibiza. They played at the famed Ushuaïa Hotel and released a Sunset Ritual cd/dvd. Anané & Louie Vega continue the party’s legacy during summer 2018 coming backto Ibiza for their second year residency at Heart The Ritual With Ananè & Louie Vega, and the continued annual touring of the Mediterranean. Guests at The Ritual Heart Ibiza have included Moodymann, The Martinez Brothers, Joseph Capriati, Soul Clap, Nicole Madauber, Cassy, Henrik Schwartz, Jazzy Jeff, Kenny Dope, & David Morales.

Breaking down musical barriers and bringing people together through a love of music has always been Vega’s aim; after more than 20 years in the game his contributions continue to positively influence global dance music. Listen closely as the best has yet to come from Louie Vega!