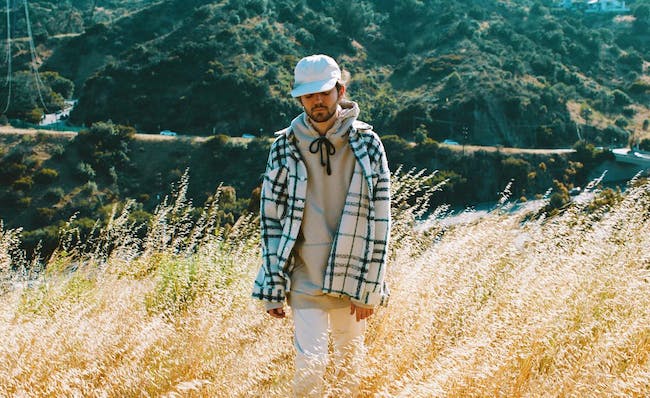 Hugo Leclercq, the musician known as Madeon, first appeared to many as something like a teenaged fireball. In 2011, his frantic yet perfectly sculptural “Pop Culture” famously sampled 39 hits, live, from Daft Punk to Solange, instantly propelling the then-17-year-old to the international stage. By the time of his debut album, Adventure, in 2015, Madeon was a globally beloved artist with production credits for Lady Gaga and Coldplay.

Yet his first full-length, released via Columbia and his own popcultur, still evokes a bright sense of wonder about the world. “I very purposefully stayed with my parents when I made Adventure because I wanted to capture my life as a teenager in France,” he says. “Listening back, it’s a good reminder that it always works out best when you’re sincere. I wasn’t pandering, I was just really trying to make what I loved.” A FADER review called it “expansive, impossibly beautiful... one of the most radiant pop albums in recent memory.” Soon after, he teamed with longtime friend Porter Robinson for “Shelter,” an immersive, ecstatic single he calls their “victory lap.”

Now, a few years later, Madeon is perhaps a more deeply seasoned artist than wide-eyed dreamer from Nantes -- but he’s just as ambitious as ever. “I knew if I wanted to make something different, I needed to change my life around,” he says, so he moved to Los Angeles to focus the project in a new way. “I wanted to wake up in the morning and feel like every second of my life was about Madeon. My walls are covered with concept art and logo designs and instruments and references and records that I love. It’s all I do from the minute I wake up to the minute I go to bed.”

“All My Friends” is the radiant introduction to this new era. Joyful and bright, it’s the sort of pop song that, by any other artist, would have required hard work from a team of writers and producers. Madeon, of course, wrote and produced the whole thing himself. Following the path he began on Adventure with songs like “Home,” he is the sole vocalist on the track. “It’s fun to do a song that’s so blatantly, sincerely pop,” he says. “I love to make that kind of music mostly on my own -- you’re not really supposed to be able to make it that way.”

Madeon began working on “All My Friends” when he booked a studio for three days in New York “just to see what would happen,” he says. “I remember I was walking alone, and the sun was a particular shade. It struck me all at once, vividly. It was like a flavor: sounds and sights and smells. I felt impossibly confident and enthusiastic, and the song became like a premonition of what I had to do.”

Often, Madeon can seem as much a musician as a world-building architect, and there’s no question his full vision for what comes next will soon shine through in high definition. But for the moment, just as when he began his career, we have a single song, a brilliant statement of new purpose.

Devault is nothing short of impressive...

What started as a creative hobby in the calm scenes of Orange County soon became a personal quest to form something bigger than a unique venture -- a modern grunge-esque landscape that takes integral instrumentation with an out of the box like sound design and casts visuals that would be reminiscent of an earlier time where rawness and vulnerability was glorified. The desire to create music and becoming an electronic artist has always been a hidden pulse in his life, whether it stemmed from his early obsessions over Depeche Mode's Dave Gahan and A$AP Rocky, or analyzing the blend of fashion, film, and music altogether. It's no longer a search for genre, but rather an evolving sound, appreciating the trials of young adulthood at age 21 and letting him and his audience grow into something beyond a young man and his music.

The journey of Devault is fairly new, but 2017 has sped up his emergence into the scene, already becoming the hottest ticket for official redos of songs as well as garnering well over 10 million total streams on Spotify. This year alone, Devault has been tapped for official remixes with Rihanna, AlunaGeorge, and Kehlani, amassing millions of plays on all platforms and being a crucial part for Rihanna's "Sex With Me" #1 spot on the Billboard Dance charts.

"Everything is so accessible now that it has become quite unique to get my point across outside of just my music catalogue," he notes. "I'm able to showcase various arts to my audience beyond sound that can convey my thoughts and past emotions. The world I'm creating is vast but specific. Dark emotion and vibrant energy in perfect sequence, and as time presses forward, it will only become more narrow and focused."

With a large demand for new material and talks of a grand live presence, Devault is showing signs of the modern new wave splash on the industry that is taking hold. His current mid-tempo electronica flare has caught ears and leaves the next chapter as exciting as the first.