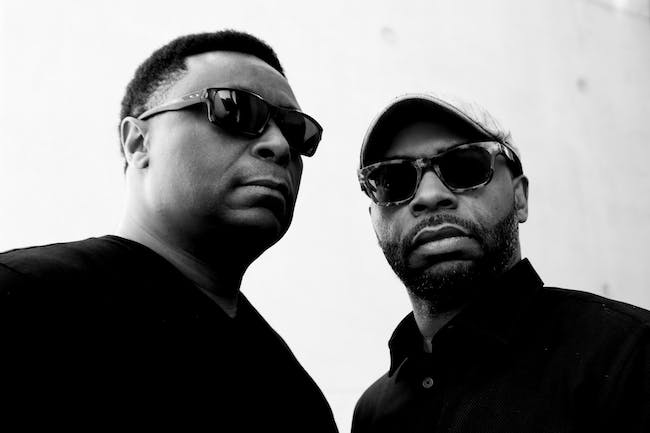 The electrifying live performances of Octave One are one reason that the Detroit born and bred producers are in constant demand. On stage, Octave One transforms synthesizers and sequencers into vessels of funk, house and symphonic beats. The live show is evidence of what longtime fans already know.

As well as performing live Octave One have penned several of the dance floor classics that define an era. With a wave of new music and global touring for 2018, the Burden brothers are set to release a new album entitled ‘Endustry’ under the much loved Random Noise Generation guise with and live shows to match.

Octave One is the brainchild of core members Lenny and Lawrence Burden. The Burden brothers burst onto the Detroit techno scene in 1990, producing their debut “I Believe,” featured on the compilation Techno 2: The Next Generation . The collective also includes frequent contributions from siblings Lynell, Lance and Lorne Burden. Their 2002 hit single "Black Water" has sold over one million records worldwide. Little Louie Vega, Danny Tenaglia, Jeff Mills and Richie Hawtin are among the DJs that continue to regularly weave “Black Water” into their sets. The group has also earned critical acclaim for countless records including "Empower," "Nicolette" and “The X-files.”

The Burdens also founded 430 West/Direct Beat Records in 1990, a record label that paved the way for the rise of the indies throughout the ’90s. Their extensive 430 West catalog ranges from Aux 88's "My A.U.X. Mind" to Rolando's "Jaguar," which included an Octave One remix. Octave One has remixed tracks for Massive Attack, Steve Bug, Aril Brikha, Vince Watson, The Trampps, Rhythm is Rhythm and Inner City. The Burdens have also released music under the band name Random Noise Generation, including a 2006 full length DVD/CD project by Octave One featuring Random Noise Generation Off The Grid, released in cooperation with Tresor Records.

After touring and making music for decades the spirit and essential energy of the craft is what keeps them eternally inspired to keep creating and touring the globe... “Once it takes hold of you you can’t stop even if you wanted to.” say the brothers.

Their 2015 album Burn It Down further pushed the pillars of funk and soul forward and introduced the band to a new generation. On “ Jazzo/Lose Yourself,” featuring a remix by

Paul Woolford and vocals by Ann Saunderson , Octave One blends the intimacy of the studio production process with the immediacy of the live performance. “We did it by slamming a DJ set with a live recording studio,” says Lawrence.

Both Lenny and Lawrence are trained musicians, who took an early interest in DJing, programming, and inventing their own sound equipment. "Our set is unique, because we've created a setup that mimics a drum kit," Lenny says.

2000 brought the most recognized Octave One release to date, "Blackwater". The massive hit has appeared on over 30 compilation albums worldwide (with sales exceeding one million collectively). It has been released domestically in 5 countries (US, UK, Spain, Germany, and Australia). The track has also been a favorite on the decks of some of the world’s best known DJs, Little Louie Vega, Danny Teneglia, Jeff Mills, Richie Hawtin, Kevin Saunderson, Derrick May, Jonathan Peters, Laurent Garnier, among many, many others.

Late 2006 brought the release of the first full length DVD/CD project from the group, Octave One featuring Random Noise Generation "Off The Grid", released in cooperation with Tresor Records/Germany. 2009 saw the release of the band's first studio album in 3 years, "Summers on Jupiter" released in cooperation with P-vine/Japan. Other Octave One albums have also highlighted the boys’ career: “The Living Key (To Images From Above)” (1997), “The Collective” (1998), and “The Theory Of Everything” (2004) among many other releases.

2011 welcomes the release of the Octave One retrospective compilation "Revisited: Here, There, and Beyond". Marking 20 years of living the Techno life. “Here, There, and Beyond" features O1 classics reworked by some of the band’s favorite producers: Luke Slater, Sandwell District, Ken Ishii, Alexander Kowalski, Vince Watson, Alter Ego, Los Hermanos, and Cari Lekebusch. One more milestone in the journey of one of Techno’s most exciting bands.