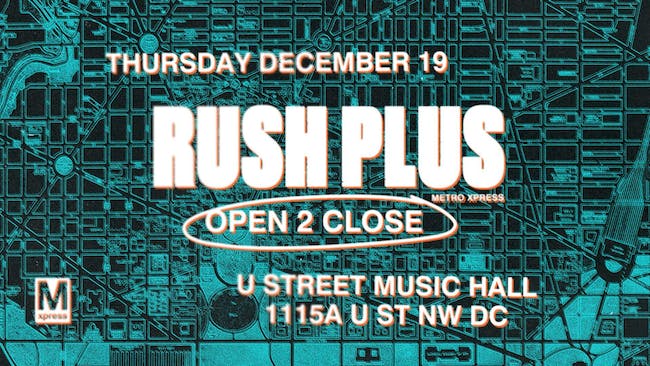 Rush Plus (open to close)

Early 2016 saw the launch of Rush Plus, techno duo and label comprised of Jackson Ryland and Justin Nouhra. The 001 record "Low For Me" began a successful campaign of self-release Rush Plus Records that would quickly find their way into the set lists of Ben Klock, Ben UFO, Anastasia Kristensen, Marcel Dettmann, Call Super and more. An EP on Ambivalent's Valance label and two recent hit records on P.Leone's E-Missions label (entitled "The Sweat" and "Staring at the Sun") have brought a different level of attention to the DC techno project with features and well-received reviews in Resident Advisor, DJ Mag, Mixmag, and The Washington Post to name a few.

For all the accolades, the support for Rush Plus has remained as steady in the headlines as it has in the city of DC itself. Local promoters and venues from Flash to U Street Music Hall, Roam to Sequence and Sprüdel have welcomed the duo onto their lineups again and again over the years while the local techno community have propped them up as the city's premiere techno producers. Here to stay, the vision still remains focused and simple - represent DC with the fast, intense and fiercely unique style of techno that is Rush Plus.