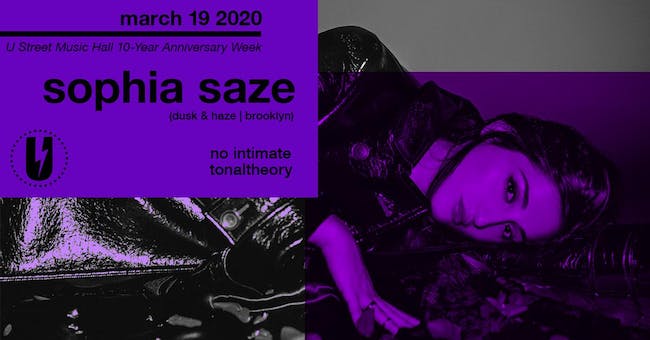 Beginning her creative journey in her formative years with classical music and dance training, Sophia Saze later became engulfed by electronic dance music. Getting to know this artist, it is easy to understand that she comes from a solid and natural musical foundation. Tbilisi, Georgia born and internationally bred, she’s now based in Brooklyn, New York. Saze launched her record label Dusk & Haze in 2017, with the first installment coming in the form of her own ‘Solace’ LP [D&H001], which included remixes from Benjamin Damage & Umwelt. The productions stem from techno, yet her musical versatility draws from a variety of genre influences, ranging from electro to krautrock, ambient to industrial, and acid to garage - showing her complete range and fluidity as a musician. 2017 also saw Sophia being signed to renowned label Get Physical where her track ‘Fall’ appears on their Words Don’t Come Easy Compilation, showcasing a more soulful downtempo side of the producer. These two releases gained attention in the print versions of both DJ Mag, Groove-Magazin, & MixMag, amongst many others as well as multiple airplays on BBC Radio 1 & NTS Radio. She’s also put forth releases on esteemed imprints including Ghostly International & Oktave Records. Equally as much as she is a producer, she’s also a DJ. Sophia Saze shapes the records she chooses for her sets into a carefully sculpted and characteristic groove. Keeping the journey on the border of house and techno, including electro and more spaced-out broken beat moments, she keeps the beat, the floor, and the dancers intact, always heading forward. Sophia is currently between her studio and touring schedule. She has a full release schedule lined up for this year, including her debut album and various singles, whilst displaying her innate ability as A&R as she welcomes new releases on her imprint Dusk & Haze. 2019 will also see the premiere of her live audio/visual show.

No Intimate, aka Sarah Snider, is a sonic and visual artist whose work explores the intersection of chance and technology. She is a member of Brujas and the founder of Pretty Records, a record label dedicated to supporting marginalized artists. Originally hailing from Rockville, she now lives and works in NYC as a DJ and tattoo artist.

Marissa and Rae have been hard at work, playing everywhere from clubs to warehouses in the District as Synthesis Residents. They have played support for some of the biggest names in the industry of both techno and trance alike (Green Velvet, Nicole Moudaber, John Askew, Triceradrops, Greg Downey). The duo also hosts a regular radio show once a month on ascension.fm (Undertone Radio), and hosts monthly parties for up and coming talent of underground music as Decibel Collective.