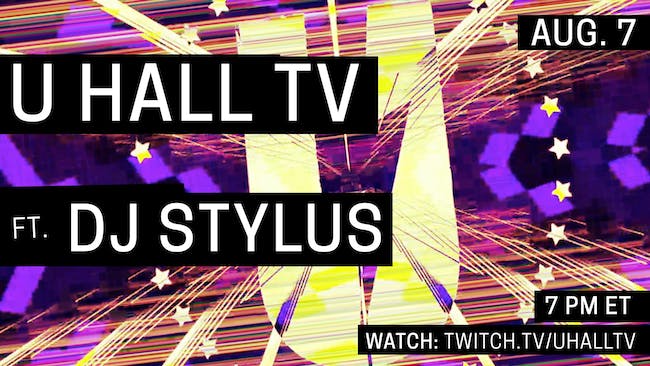 iCal
Google
FREE. Watch live from 7-9PM at twitch.tv/uhalltv. Support artists & U Hall staff: Donate to the U HALL TV Tip Jar on Venmo at @uhalltv

Join us at the club (virtually) for the next episode of U HALL TV. This week we're welcoming DC's DJ Stylus.

There are too many records in the world to stick to one style and over a double decade career, DJ Stylus has assimilated them into seamless experiences that are nuanced, compelling, ambitious and far-ranging. Whether it’s opening for acts as varied as Z-Trip or Boyz II Men or sharing turntables with MC Lyte, Rich Medina, ?uestlove, Gilles Peterson and many more, The Vibe Conductor (a moniker bestowed by fans) has established a brand as a DJ’s DJ and a discerning curator of music. Stylus keeps an international focus while repping his hometown of Washington DC. After getting his start as a DJ while living in the Netherlands, Stylus has since touched audiences from Europe to South America, bringing a sophisticated style of party rock to eclectic dancefloors.

In 2018, DJ Stylus was chosen by Destination DC as one of five representatives of The Arts District, giving Washington, D.C. visitors an insider’s tour of the city’s bustling arts and culture scenes.

Stylus started 2015 in grand fashion by sitting in with the National Symphony Orchestra as a part of their NSO In Your Neighborhood program.

In 2014, DJ Stylus performed at the John F. Kennedy Center for the Performing Arts as part of the One Mic festival. The show Hip-Hop In The Pocket was a collaboration with Pure Perfection Band that put hip-hop and Washington D.C.’s native go-go music in playful conversation.

Stylus is a resident DJ with Axel F, an event launched with DJs Jahsonic and Adrian Loving that celebrates all the jheri curl funk, champagne soul and lazer boogie that you never hear at your standard ’80s party.

As a member of The Soul Controllers, Stylus started out at the University of Maryland’s 88.1 WMUC before eventually moving on to a two year stint on XM Satellite Radio. The Soul Controllers helped launch the Decipher progressive hip-hop block on Pacifica’s WPFW 89.3 FM and continue to define excellence as a DJ crew into their third decade.

Stylus is also a founding member of The POEM-CEES, the “Run-De La Soul” of DC hip-hop who are nationally recognized for fusing together the best of the poetry and hip-hop worlds. Since 1998 the POEM-CEES have released three albums, two chart-topping independent singles, won two Washington Area Music Awards, toured extensively and performed theatrical productions for the Hip-Hop Theater Festival and Capital Renaissance Theatre. Stylus is an integral part of the POEM-CEES’ legendary live show, a portion of which was experienced on television after naturalaw-dp and Black Picasso’s three appearances on HBO’s Def Poetry Jam.

Stylus has plied his trade at all of the major venues in Washington DC and won back to back Washington Area Music Awards for Hip-Hop DJ. He was the main DJ for the Freestyle Union, an organization started by emcee, educator and author Toni Blackman that honed the skills of most of Washington’s most talented veteran hip-hop performers.

- Buy a U Hall shirt! Proceeds benefit U Hall's staff during this shutdown.