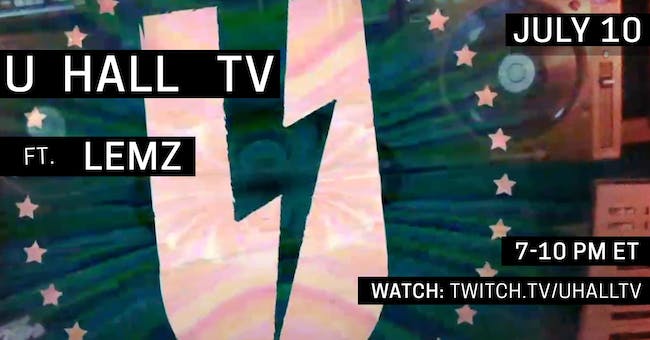 iCal
Google
FREE. Watch live from 7-10PM at twitch.tv/uhalltv. Support artists & U Hall staff: Donate to the U HALL TV Tip Jar on Venmo at @uhalltv

Join us at the club (virtually!) for the next installment of U HALL TV on Twitch. This time we're welcoming D.C. DJ Lemz.

Buy a U Hall shirt! Proceeds benefit U Hall's staff during this shutdown.

Lemz makes the dance floor feel like both a home and an escape. As a DJ/producer, his club sets and original productions run the gamut from disco, house, techno – even a bit of top 40 pop when the time is right – plus he can read almost any crowd like an open book. Behind a pair of Technics since the age of 12, Lemz’s early foundation in the craft led to a seemingly effortless skill that belies his laser-driven focus and constant challenge to surprise, and thrill, his audiences. Born in California and raised in Baltimore, the now DC-resident has racked up an impressive roster of parties (BENT, Sleaze, Rough House) and residencies in our nation’s capital with seemingly no intention of slowing down. It may look like he wants to rule the scene, but he really just wants to make you dance.