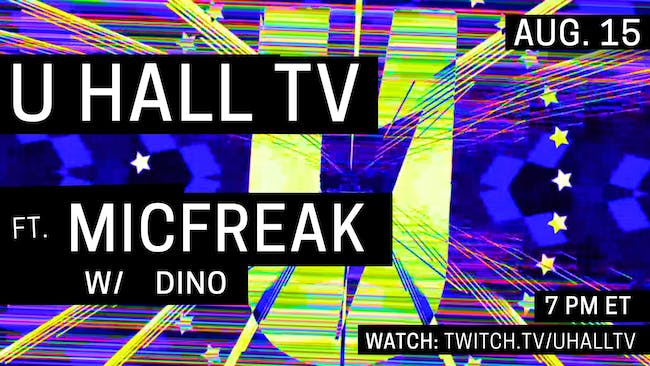 Join us at the club (virtually) for the next episode of U HALL TV. This week we're welcoming DC's Micfreak and DINO.

Micfreak is a chart-topping producer, dj, artist and musician from Baltimore. A multi-instrumentalist, Micfreak brings his love of piano, guitar and drums into his house productions creating his own unique sound. He likes to fuse squelching and melodic synth lines, drippy arpeggios,chords, throbbing & funky basslines and supersized beats. He has released with top labels like Quanitize Recordings, Unquantize, Fogbank, Monoside, Deeplife Records, Chubrub, Funktrap, MK837 Groovy Riddim, Vamos & more! He has worked and been supported by some of the legendary names in house music like DJ Spen, Angelo Ferreri, JPaul Getto, Terrence Parker, Eddie Amador, Roger Sanchez and many more. His output in 2018 was non stop with several of his tracks and remixes charting between Traxsource and Beatport.

As a DJ he has played some of the top venues in the Baltimore and DC area like Flash, U St. Music Hall, Backbar, Jimmy Valentines, The Paradox, Red Maple, Club1722 and more. He has shared the decks with several notable DJ’s namely DJ Spen, Robert Hood, Stacey Pullen, Anthony Parasole, Low Steppa, Mike Huckaby and also does regular events in the area with Decibel Collective showcasing his knack for creating a vibe that also features up and coming DJs as well.

DJ Spen took notice of this emerging talent, and took him under his wing and signed him to an album deal on Quantize Recordings for 2019. Spen has been hammering Micfreak’s latest tracks around the globe and most recently at his Mixmag Live in the Studio Session. His album “Feelin’ It” was featured as Album of the Week by Traxsource and stayed in the charts for weeks. One of the tracks on the album Extra Sauce was dropped by Roger Sanchez on his Release Yourself radio show. This led to Roger inviting Micfreak to do a guestmix for his show. Another track on the album “Drums and Bass” also got massive support from Claptone. His release on Quantize called Hot Hot Hot House has gotten bigtime support from the legendary duo of Kenny Dope and Louie Vega, Masters At Work at Defected Croatia. His body of work for 2019 was massive that he made it onto the Traxsource Top 100 House Artist of The Year.

It all started with the double disc CD from Mykonos Greece, ‘Cafe Paradiso All Star Chillout’ in the year 2000. Violetta ( DINO ), heard Nightmares On Wax, Aphex Twin and curator Jose Padilla for the first time, and she was hooked.

“I felt like I found my space. A laid back tempo and rhythm that conjured images of the runway. It was a sound that matched the images in my mind.”

Violetta began collecting compilations from Greece and Ibiza every time she traveled overseas. After 13 years as an avid collector of the distinct “chill-out” sound, and during her career as a photographer, photographing musicians and dj’s, she was persuaded by one DJ in particular to buy a mixer and try mixing music herself. It came naturally but, Violetta never intended to play live anywhere and definitely not in front of anyone.

She was convinced to play an opening set for her DJ friend one night at a local lounge in May of 2013 and from there, music took a turn for the serious. DINO, (a nickname from childhood), became the alter-ego of Violetta’s photography persona. She began djing at coveted venues such as Flash, Tropicalia and Mate. Fashion shows, art happenings and high profile events soon followed.

She continues to play what she refers to as, “Beats & Beautiful Music”, creating mixes and live recordings that can be found on Mixcloud and on her weekly radio show at The Line Hotel in Washington D.C.

“The music I play cannot be categorized I feel. Simply, it is beats and beautiful music fusing soul, jazz, electronica, deep house, orchestral and instrumental elements. It is cerebral, elegant, soulful and sensual. My goal is to take the listener on a journey of self discovery. To offer them a sound they haven’t experienced before.”

- Buy U Hall merch! Proceeds benefit U Hall's staff during this shutdown.